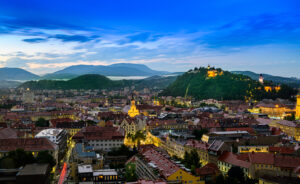 The capital of Styria with close to 300.000 inhabitants, 4 universities and more than 42.000 students, is a perfect host for any academic conference. Austria’s second largest city boasts more than 900 years of vibrant history. The best-preserved historic city centre in Central Europe is a UNESCO world cultural heritage site. In addition, Graz was declared UNESCO City of Design in 2010, and is one of only 16 cities worldwide to have received this award. Graz is a study in contrast between historic and modern, exemplified by the Zeughaus armoury, housing the largest historical collection of weapons in the world in its original state, and the ‘friendly alien’, the Kunsthaus Graz that features contemporary art from all over the world.