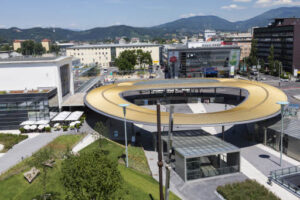 Located in the south of the province of Styria, some 30 miles north of the Slovenian border, Graz has an international airport just outside the city which connects the city to several transportation hubs including Frankfurt, Munich, and Vienna. Regular busses and a local train service provide easy transport to and from the airport. Vienna Airport has a train (and bus) connection to Graz as well.

Note that most transportation options do not operate after 11pm. If your flight or train arrives late, it may be necessary to use a taxi service.